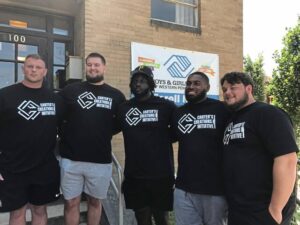 When you stand 6-foot-5 and weigh 320 pounds with thick arms and a muscle-bound chest, it may be difficult to look welcoming.

But Carter Warren and four of his similarly sized buddies on Pitt’s offensive line pulled it off Tuesday. They greeted, mingled with and even played a game of “Connect 4” (Jake Kradel’s specialty) and shot bumper pool (Gabe Houy’s area of expertise) with several young people at the Boys and Girls Club North Area Clubhouse in Millvale.

It was part of an event entitled “Carter’s Creations Initiative.” It was hosted by Carter, who is entering his fourth season as Pitt’s starting left offensive tackle. As an example of solidarity and to give the kids a thrill, he brought along Pitt’s other starting linemen: Marcus Minor, Owen Drexel, Kradel and Houy, who he described as “my best friends.”

Perhaps NCAA name, image and likeness legislation offered a boost, but Warren planned the event himself. It likely would have happened even without the existence of NIL. He and his teammates handed out T-shirts to the kids, and proceeds from sales of the excess inventory will go directly to the Boys and Girls Club, said Sammy Spina, who is Warren’s NIL representative.

Carter said the idea of taking an afternoon to spend time with the kids “started with a dream and a passion.”

“Growing up, I was always in a Boys and Girls Club,” he said. “I just wanted to give back. It’s all about (the kids).

“Growing up, living in Paterson, N.J., there’s not much around. The Boys and Girls Club, that was a safe haven for a lot of people.”

Carter said he enjoys the questions kids usually throw at him.

Jessi Marsh, vice president of advancement and philanthropy for Boys and Girls Clubs, said the players’ size — the five of them average 6-4, 315 — is impressive, especially to a little person.

“Getting up close with these players — they’re so big, right? — they’re a little intimidating, but (the children) know they’re here for great reasons,” she said, “and they want to spend time with them and get to know them.

“You’ll notice when the players get down on the level of the kids and look them in the eye and ask their names and shake their hands, it means so much to them.

“It helps them remember that they’re important and they matter. What the kids take away is people in the community care about them, people who do exciting things care about them.”

Stepping into the community to help others and set an example is nothing new for Pitt student-athletes. Kenny Pickett did the same last year at the Lawrenceville Boys and Girls Club.

Pitt ranked ninth overall in Division I and first among Power 5 schools in community service efforts during the 2021-22 school year, according to Helper Helper, a volunteer management and tracking platform. Pitt also had five programs ranked in the top 5 in their respective sport, including football which ranked No. 1 in the nation.

The event also was a chance for Pitt’s linemen to put their solidarity on display. At the end of last season, all five players, who are now redshirt seniors, got together and decided to postpone their NFL hopes and come back to Pitt for the 2022 season.

“We do everything together,” Warren said. “We’re a tight-knit group. I wanted to have them here with me. It’s a team event, even though my name’s on the shirt.”

Added Minor: “If I’m able to mentor one (child), then I’ve done something I’ve always wanted to do. This world needs a lot more love.”